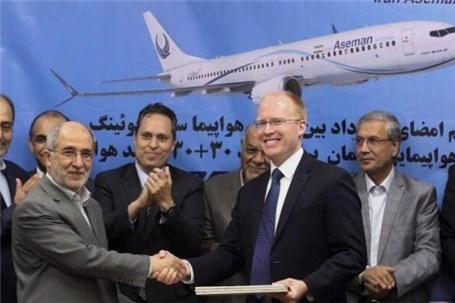 Asre Bazar- Iran Aseman Airlines signed a final contract with the American planemaker Boeing in Tehran on Saturday to purchase 30 B737-Max passenger jets worth $3 billion based on catalog prices with the option of adding 30 more in the future.

Reporting "Asre Bazar", the aircraft which have yet to be licensed by the US Treasury Department's Office of Foreign Assets Control are scheduled to be delivered as of 2019. Five to ten jets are expected to be delivered in that year, Ministry of Cooperatives, Labor and Social Welfare website reported. Iran’s Civil Servants Pension Organization, affiliated to the labor ministry, is a major shareholder of Aseman.

Labor Minister Ali Rabiei was quoted as saying during the signing ceremony of the contract that Boeing will support financing of 95% of the value of the deal.

A preliminary agreement was signed between Aseman and Boeing on March 18 in the presence of Boeing representatives in Tehran after almost one year of negotiations.

Iran Aseman Airlines is the second Iranian airline to order brand new aircraft from Boeing after the lifting of nuclear sanctions in January 2016, as part of the nuclear deal Iran clinched with world powers earlier in 2015.

Aseman is also in talks with Airbus to add two A340s and seven A321s to its fleet, which is the third largest in Iran, after Iran Air and Mahan.

While many analysts have expressed concern that Iran’s plane deals might be at risk amid uncertainty over US President Donald Trump’s Iran policy, Iran has so far received seven planes, including three Airbus jets and four ATR turboprops.

Aircraft manufacturers need OFAC licenses as more than 10% of their components come from the United States.