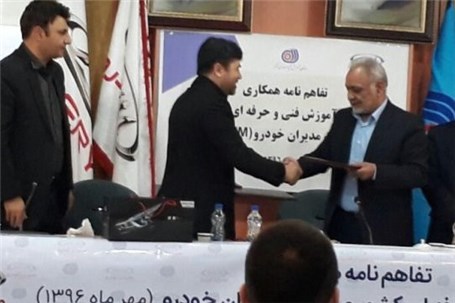 Reporting " Asre Bazar", from France’s Renault to China’s Chery, international automakers have started offering training services in Iran to help improve the skills of technicians and by extension increase their market share in the expanding auto market.

President Hassan Rouhani and his government has made known that one of the main pillars of Iran’s economic and industrial collaboration with the outside world is and will be sharing expertise, technology transfer and localization in the manufacturing sector.

With the declared aim of improving the struggling auto production sector the government has introduced rules that require Iranian companies and their foreign partners to include technology transfer in their agreements.

Seemingly this policy, on which the government has laid extra emphasis over the past two years, is gaining traction as an increasing number of international carmakers try to secure a stable presence in the lucrative Iranian market and are gradually launching training courses for technicians and workers.

The agreement was signed during a ceremony in Tehran by the head of ITVT Amin Sazgarnezhad, Chery’s Managing Director Zhu Shadong and MVM’s CEO Bahram Shariat, the local automotive website Asbe Bokhar reported.

According to MVM after-sales manager Mohammad Ali Qaderi, the company is set to equip 32 ITVT centers and offer technical courses.

Qaderi said the agreement calls for training students in mechanics and familiarizing them with modern technologies.

With the rapid advancement in technology, the mechanic's job has evolved from purely mechanical, to include electronic technology. Because vehicles today possess complex computer and electronic systems, mechanics need to have a broader base of knowledge than in the past. Furthermore, in various cases sophisticated diagnostic computers are required for fixing the problems.

Cherry started its local operations in 2004 and so far has sold 27 models in Iran. According to the company’s data, 250,000 Chery vehicles have so far been sold in the domestic market.

Data released by the Ministry of Industries indicate that the company produced 26,485 cars during the first five months of the current fiscal (started in March), indicating a 36.3% YoY increase. Chery has a 4% share in Iran’s automotive output.

Renault signed a trilateral production deal with the Industrial Development and Renovation Organization of Iran and a local private company Negin Khodro in August. Training Iranian suppliers is among Renault’s commitments.

However, locally manufactured auto parts do not always meet international automotive standards, a hurdle which has made foreign companies operating in Iran more than reluctant to use Iran-made parts in their products.

Currently, Renault trains local suppliers and provides them with technology for producing parts that can meet the French company’s standards. The company is also set to open an engineering center in Iran as it expands its footprint in the large and expanding domestic car market.

Renault is one of the major carmakers in Iran and has a 10% share of the market. Data released by the company indicates that it sold 99,617 cars in Iran during the first eight months of the current fiscal.

A report published on the company’s website indicates that Iran has a 4% share in Renault global sales — the company sold 2.4 million cars globally during the eight months to August.