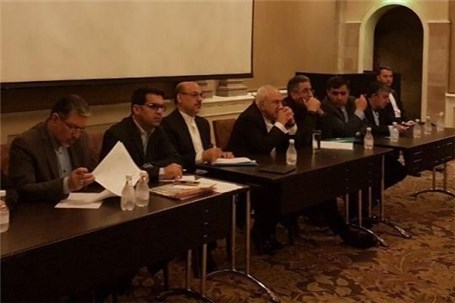 Reportimg " Asre Bazar", Zarif who is heading a senior delegation of political and economic figures comprised of business representatives from the automotive, agriculture, agro-processing, mining, energy, pharmaceuticals and, oil and gas, arrived in South African administrative capital city of Pretoria on Sunday.

He delivered a brief speech at the forum, voicing Iran’s keen interest in expanding relations with the African country, noting that Iran enjoys a high level of security for foreign investment. He also announced President Rouhani’s upcoming visit to South Africa in a few months, Mehr News Agency reported.

She called for strengthening of banking cooperation between the two sides, adding “South Africa sees no obstacle to expanding relations with Iran.”

The private sectors of the two countries also discussed issues related to economy, trade, and commerce during the event and exchanged views on ways to remove obstacles to investment.

“The Middle East features as a pivotal trade and investment partner for South Africa and Iran, in particular, offers vast trade and investment opportunities for South African businesses. Iran is the second largest economy in the Middle East region in terms of gross domestic product totaling $438 billion in 2016 and the largest market in terms of population (80 million people). It ranks second in the world in terms of natural gas reserves and fourth in proven crude oil reserves,” said South African Minister of Trade and Industry Rob Davies a few days before the forum.

Following the forum, Zarif held a bilateral meeting with his South African counterpart and took part in the 13th meeting of Iran-South Africa Joint Economic Commission.

Since the last joint commission meeting held in Iran in May 2015, a number of high-level interactions between the two countries have occurred, the most recent being the state visit by President Jacob Zuma in April 2016.

An analysis of trade between Iran and South Africa during the last ten years shows there has been a growing trend since fiscal year March 2014-15, in which $49 million worth of commodities were exchanged between the two countries – its lowest level during the period under review.

However, bilateral trade grew to reach $55 million and $92.8 million the two following years respectively. The figure had peaked at $129 million in March 2010-11.

Latest figures show Iran exported $25.85 million worth of goods to South Africa during the six months to September 22 and imported $3.5 million in return.