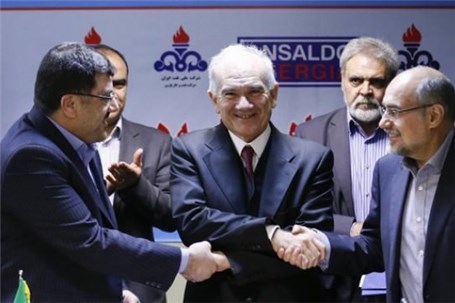 Asre Bazar- Italy's Ansaldo Energia signed a memorandum of understanding with several subsidiaries of the state oil company NIOC on Wednesday on using natural gas that is being burned off in South Pars Gas Field Phase 12 in the Persian Gulf for electricity generation.

Reporting "Asre Bazar", the Italian firm, which is a leading international player in the power generation industry, will collect associated petroleum gas that is flared at Phase 12 into electrical power with the help of special turbines which have been manufactured for this purpose, Shana reported.

Phase 12 is South Pars’ biggest phase in terms of volume of activities as well as investment and production level. The field is estimated to contain 14 trillion cubic meters of gas.

"The MoU calls for producing 600 megawatts of electricity in the first phase," Vakili said, noting that combined-cycle turbines will help the Italian firm to raise the capacity to 1000 MW in the second phase of the project.

The MoU is part of Iran's efforts to reduce its environmental impact, especially in the oil and gas sector that has been the cause of some of the biggest environmental disasters in the last few decades.

According to Vakili, based on the terms of the MoU, Ansaldo will also be tasked with rehabilitation of oil and gas equipment like well-head installations and pumping stations in NISOC, Pars Oil and Gas Company as well as the Iranian Central Oil Fields Company.

"Implementation of the two ventures will not only play a major role in maximizing the efficiency of the oil and gas equipment but also help curb the burning of huge amounts of associated petroleum gas," he added.

At the beginning of this year, Iran's Parliament signed into law a bill to curb the flaring of natural gas to 10% or lower by 2021. Oil-and gas-rich Iran has committed to a global pact to move away from fossil fuels with the goal of limiting a rise in average global temperatures to well below 2 degrees Celsius.