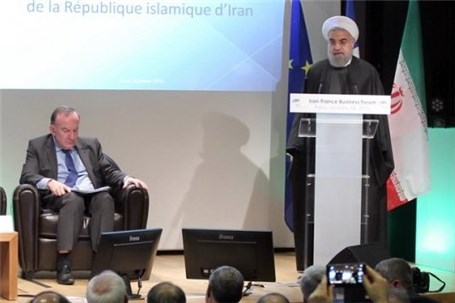 Asre Bazar- French businesses and foreign and finance ministry officials will meet next week, as they work together to understand better the consequences of US President Donald Trump’s refusal to certify the 2015 Iran nuclear deal.

Reporting " Asre Bazar", multinationals Total and Peugeot are among the most high-profile companies to have signed new deals since the nuclear agreement, formally called the Joint Comprehensive Plan of Action, that provided sanctions relief for Iran and dozens of smaller French firms have also moved in or are looking to tap the Iranian market, Reuters reported.

According to an invitation sent to companies by the Medef business group, officials from the foreign ministry, finance ministry and France’s business office in Tehran will offer on Tuesday an “analysis of the consequences of the non-certification” by Trump of the accord.

European capitals are determined to keep alive an accord that offered Iran an economic lifeline and the Paris government wants to know how its companies might react to the US move.

Trying Not to Be “Overly Alarmist”

“We’re still assessing how firms are reacting to the Trump decision, but we are trying to not be overly alarmist with them,” said a French diplomatic source.

While Trump did not pull the United States out of the agreement, he gave the US Congress 60 days to decide whether to reimpose economic sanctions on Tehran that were lifted under the pact agreed between Iran and six world powers.

Despite a long history of commercial, political and social links with Iran that even saw Ayatollah Ruhollah Khomenei in exile near Paris in 1979, France took one of the hardest lines of the six powers negotiating the nuclear agreement with Iran.

Since the deal was agreed, however, France has maneuvered to deepen economic ties with Tehran and has repeatedly said it believes Iran is fully implementing the nuclear accord.

The Renault Group finalized a contract for a joint venture with Iranian carmakers on Aug. 7. The contract is in addition to the long list of transactions of French companies with Iran in the period following the JCPOA with six world powers concluded in July 2015.

At that time, Iran’s President Hassan Rouhani, accompanied by Mohammad Reza Nematzadeh, the then industries minister, went to Paris.

On the French side, two foreign ministers, Laurent Fabius and Jean-Marc Ayrault, as well as ministers of economy, transport, foreign trade, agriculture and higher education, traveled to Tehran.

In terms of economic relations, according to a report by Muriel Penicaud, former director of the French Agency for International Investments, since the signing of the nuclear agreement, officials from more than 300 French companies visited Iran and more than 2,000 companies expressed their wish to work with Iranian partners.

The biggest contract was signed by the oil giant Total: a more than 50% stake in an investment of about $4.8 billion for the development of an offshore gas field in the Persian Gulf.

Other important contracts have also been signed or are under negotiation: The sale of more than 100 Airbus aircraft, ongoing negotiations for the sale of about 40 medium-haul aircraft, PSA (Peugeot-Citroen) contracts with top Iranian automakers Iran Khodro and SAIPA, as well as that of Alstom with the Iranian companies IDRO and IRICO railcars are among many other joint ventures signed in various fields.

The result has been a 235% increase in trade between Iran and France in 2016, Michel Sapin, former economy and finance minister, said on March 4, 2017.

Moreover, French construction firm Vinci signed a preliminary agreement with the Iranian government to develop airports in the Iranian cities and tourist hubs of Mashhad and Isfahan after representatives of the European company participated in a business forum at Iran Chamber of Commerce, Industries, Mines and Agriculture’s headquarters on January 31. Unofficial reports put the value of the deal at $404 million.

The delegation led by Yves-Thibault de Silguy, vice chairman and senior lead director of Vinci and chairman of the French-Iranian Business Council, was comprised of about 50 companies active in the fields of infrastructure, transportation, energy and environment. It was also accompanied by Jean-Baptiste Lemoyne, secretary of state to the minister for Europe and foreign affairs.

The mission’s aim, according to Medef, was “to meet with the recently appointed Iranian authorities and discuss the priorities of the new government”.

It was the second French delegation to visit Iran in 2017, the fifth since the first election of President Hassan Rouhani in August 2013 and the first major European delegation since the Iranian presidential elections of May 2017.

“The presence of representatives from 40 small and big French companies with me in the ICCIMA indicates our eagerness to expand economic ties with Iran. The French companies are not just looking for trade but pursue long-term partnerships,” said Silguy in a joint business forum held in Iran Chamber of Commerce, Industries, Mines and Agriculture.

According to ICCIMA President Gholamhossein Shafei, Iran-France bilateral trade currently stands at $2.4 billion per annum and the two countries plan to at least double the figure by 2018.

The French Ministry for the Economy and Finance is planning to grant a €70 million loan to Iran for the renovation of the country’s airport equipment and radars, said Lemoyne in a meeting with Iranian Minister of Roads and Urban Development Abbas Akhoundi in Tehran during the visit.

The visiting official also said that to compensate the absence of European and French banks in Iran, the French government is defining mechanisms by which it could offer inter-governmental loans to Iran.

Lemoyne also announced that Minister of Transport Elisabeth Borne is scheduled to pay a visit to Iran in October.

According to a notice on the Medef website, the discussion points in the upcoming meeting include an explanation on the next steps at the US Congress, the positions of the accord’s other signatories—Britain, France, Germany, Russia, China and the European Union—and the immediate consequences on companies already operating in Iran.

His comments seemed aimed at assuaging European concerns that Washington is deliberately creating uncertainty about the nuclear deal’s future to pressure European banks and firms to stay away from Iran.

“The president’s been pretty clear that it’s not his intent to interfere with business deals that the Europeans may have underway with Iran,” he said.

EU leaders, who lobbied to stop Trump from withholding his support for the deal, met Thursday in Brussels and afterward released a statement reaffirming the bloc’s “full commitment” to the 2015 agreement.

The EU has said it would keep European sanctions suspended, as long as Iran sticks by its commitments under the deal.