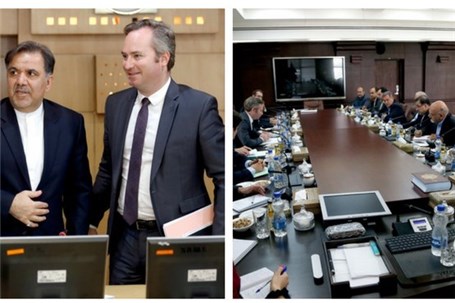 France Gov't to Grant €70m for Development of Iranian Airports

Asre Bazar- The French Ministry for the Economy and Finance is planning to grant a €70 million loan to Iran for the renovation of the country's airport equipment and radars, said Jean-Baptiste Lemoyne, secretary of state to the minister for Europe and foreign affairs in a meeting with Abbas Akhoundi, the Iranian Minister of Roads and Urban Development in Tehran on Tuesday.

Reporting "Asre Bazar", the visiting official also said that to compensate the absence of European and French banks in Iran, the French government is defining mechanisms by which it could offer inter-governmental loans to Iran, Mehr News Agency reported.

Moreover, Lemoyne announced that Minister of Transport Élisabeth Borne is scheduled to pay a visit to Iran in October.

French construction firm Vinci signed a preliminary agreement with the Iranian government to develop airports in the two Iranian cities and tourist hubs of Mashhad and Isfahan after representatives of the European company participated in a business forum at Iran Chamber of Commerce, Industries, Mines and Agriculture’s headquarters on January 31. Unofficial reports put the value of the deal at $404 million. Negotiations for that matter have been ongoing since President Hassan Rouhani traveled to Paris a few days after the implementation of the nuclear deal.

Referring to the United States House of Representatives' Wednesday adoption of measures to prevent sales of commercial aircraft to Iran, Akhoundi described the move as a "stunt" and said despite the measure two ATR aircraft will be delivered to Iran within the next 10 days.

"We have grown used to the US not making good on its promises… All companies remain committed to the deals and are bound to implement them." CEO of Iran’s Civil Aviation Organization Ali Abedzadeh was quoted as saying after the US measure was adopted.

Echoing similar remarks, the Secretary-General of the Association of Iranian Airlines told IRNA that Iran's deals to purchase jetliners signed after the removal of nuclear sanctions will remain valid despite the Wednesday measure.

Iran's flag carrier IranAir has signed a contract with ATR to purchase 20 of the planemaker’s turboprop regional plane to complete a post-sanctions shopping list which also includes 100 Airbus and 80 Boeing jets.

The state-airline has so far received three Airbus and four ATRs.

Meanwhile, in a joint business forum held in Iran Chamber of Commerce, Industries, Mines and Agriculture and presided by Yves-Thibault de Silguy, vice chairman and senior lead director of Vinci and chairman of the French-Iranian Business Council and Gholam-Hossein Shafei, the head of the Iranian chamber, the two sides insisted on the expansion of bilateral cooperation in different fields.

“The presence of representatives from 40 small and big French companies with me in the ICCIMA indicates our eagerness to expand economic ties with Iran. The French companies are not just looking for trade but pursue long-term partnerships,” said Silguy.

According to Shafeie, Iran-France bilateral trade currently stands at $2.4 billion per annum and the two countries plan to at least double the figure by 2018.

Later in the day, members of the visiting delegation composed of representatives of French companies active in the fields of industries, banking, finance, energy, international marketing, agriculture, rail transport, airport management and health held B2B meetings with their Iranian counterparts at the headquarters of ICCIMA.

Lemoyne and Silguy are heading a high-ranking business delegation to Tehran and later to Isfahan organized by the Movement of the Enterprises of France (also known as MEDEF) and its local structure, CFAT (French Business Center of Tehran).

The French delegation arrived in Tehran on Sunday. On Wednesday, they will be in Isfahan to meet with officials, the Isfahan Chamber of Commerce, Industries, Mines and Agriculture and its member companies. A site visit to Isfahan City Center, the largest mall in Iran, is also planned.

Established in 1998, MEDEF is the largest employer federation in France. It has more than 750,000 member firms, 90% of them being small- and medium-sized enterprises.