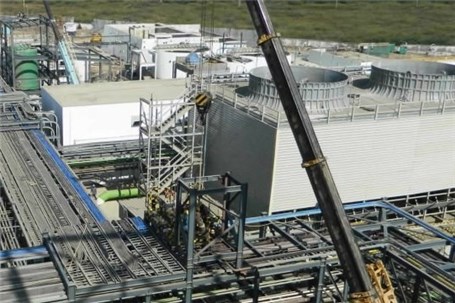 Asre Bazar- The construction of a major petrochemical complex in western Ilam Province commenced on Wednesday.

Reporting "Asre Bazar", Dehloran Petrochemical Complex, near the border with Iraq and 230 kilometers south of the provincial capital of Ilam in westerb Iran, is designed to produce 700,000 tons of ethylene and 150,000 tons of propylene annually, NIPNA reported.

"The petrochemical venture is estimated to require $550 million and 4 trillion rials (about $105 million) in finance, which will be provided through investors and pension funds," Hassan Beygi, managing director of Dehloran project, said without providing details.

According to Beygi, negotiations are in place to attract foreign investment

"Scheduled to become operational in two years, the petrochemical plant will receive ample supplies of water and natural gas–two important components of any petrochemical unit—once it is ready for launch," he said.

"There is a dam 2 kilometers off the petrochemical complex to ensure a steady supply of water."

Refining, petrochemical and chemical sectors are among water-intensive industries.

The official added that NGL 3100, an under-development venture to collect associated petroleum gases from oilfields in Ilam, will feed Dehloran petrochemical unit with natural gas.

"Dehloran venture is part of a drive to complete the value chain in the downstream petrochemical industry," Beygi said, adding that the plant will bolster regional economy by creating dozens of jobs.

With a population of around 66,000, Dehloran is home to an oilfield that went on stream about 40 years ago.

The county is set to become one of the largest domestic producers of highly-used petrochemicals: ethylene, as the building block for a vast range of chemicals, and propylene, a thermoplastic polymer with wide applications in packaging, textiles, laboratory equipment and automotive components.

Iran is expanding its petrochemical industry to generate more revenue from chemicals and petrochemicals that offer higher value-added compared to raw-selling of crude oil and natural gas.

The country exported 7.188 million tons of petrochemicals and polymers, up nearly 5% from 6.847 million tons in the same period of last year, according to NPC data.

The petrochemical consignments were mostly dispatched to Asia, Europe and South America.