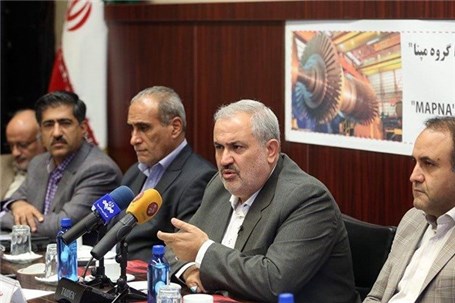 Asre Bazar- Iran's top engineering and energy enterprise MAPNA Group on Monday unveiled an improved design of a gas turbine for use in domestic power stations as well as a major power project in the southern Iraqi city of Basra.

"MGT-70 is a major industrial achievement and one of the best-in-class turbines in the world. The third generation of MGT-70 will allow us to expand power production capacity without spending massive amounts of money on new power units," Aliabadi said.

The third upgrade to the MGT-70 turbine has improved the turbine’s efficiency by 2.2% to 36.4% over the previous design and increased its output capacity to 185 megawatts, or more than 15% over the second generation.

"Most turbines used in Iranian power stations are from the E-class family and can be upgraded to the new MGT-70 with improved efficiency and performance," the MAPNA chief added.

The turbine has been developed by MAPNA from the ground up in five years.

"There are around 170 installed E-class turbines in Iran whose output capacity would increase by 5,000 megawatts if upgraded to the latest MGT-70 design. MAPNA can upgrade an E-class turbine to the MAP2B model within 45 days," he said.

The upgrade includes a redesign of main components of the turbine, namely blades, vanes and the cooling system. The new MGT-70 turbine will reduce annual fuel consumption by up to 20 million cubic meters per unit compared to the previous design, the company said.

The turbine will be one of the key components of a 3,000-MW power plant in Basra, known as Rumaila Combined-Cycle Power Plant.

MAPNA has dispatched 12 new MGT-70 units to the Iraqi power station and a single unit is now operating at a combined-cycle power plant in Parand, about 60 kilometers southwest of Tehran.

According to Aliabadi, the Rumaila power plant is the biggest technical project in the Middle East, which will increase Iraq's total power generation capacity by 20%. In the first development phase, gas turbines are to be installed and integrated with Iraq's power grid and then the steam units will be installed.

MAPNA signed a $2.5 billion contract with Shamara Group, an Iraqi consortium of 14 industrial and energy companies, in July 2015, shortly after Iran and the six world powers (the five permanent members of the United Nations Security Council plus Germany) announced a historic agreement on scaling back international sanctions against Tehran in exchange for curbs on its nuclear program.

Majid Bahmani, managing director of MAPNA Turbine Engineering and Manufacturing Company, a subsidiary of the group, told the same conference that the 2.2% increase in efficiency of third-generation MGT-70 turbine is a significant technological leap.

"To put it into context, Siemens, one of the world's biggest turbine manufacturers, introduced an E-Class turbine in the early 1990s with 37% efficiency, but it took the company over two decades to enhance the number by 3%," he said.

MAPNA Group is a conglomerate of Iranian companies involved in development and execution of thermal and renewable power, oil and gas, railroad transportation and other industrial projects as well as manufacturing equipment.

The consortium is playing a key role in upgrading Iran's power industry that grappled with a lack of investment and technology when economic restrictions were in place. It also operates in the power projects of Iraq, Syria, Pakistan, Oman and Indonesia, among other markets.

The company last year signed a contract with Siemens for more than 20 gas turbines and associated generators that will be delivered over the next decade as well as transfer of turbine manufacturing knowhow. Siemens shipped its first highly-efficient F-class gas turbine to MAPNA in September.

The two sides are also set to cooperate on the extension and optimization of Iran's Iranian power infrastructure, according to a statement on Siemens’ website.