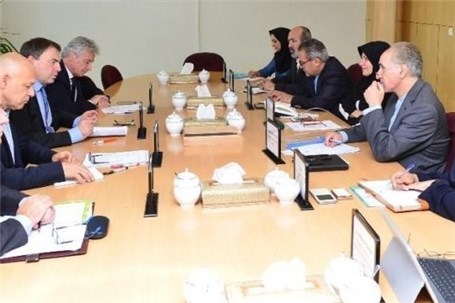 Asre Bazar- Total S.A. could spend up to $2 billion in Iran's petrochemical industry in what would further cement the position of the world's fourth largest oil and gas company in the Iranian economy.

Reporting "Asre Bazar", "Total is in talks to build three petrochemical plants in Iran with a total production capacity of 2.2 million tons of petrochemicals and polymers annually. If talks come to fruition, Total will invest between $1.5 billion and $2 billion in the petrochemical projects," said Marzieh Shahdaei, chief executive officer of state petrochemical company, the NPC, NIPNA reported on Tuesday.

She made the statement after Total chief executive Patrick Pouyanne on Monday signed a milestone deal in Tehran to develop a phase of the giant South Pars Gas Field in a $4.8 billion contract.

The gas deal with Total, which also includes China National Petroleum Corporation and state-owned Iranian firm Petropars as partners, is the first major petroleum contract between Tehran and a top-flight western company after the removal of sanctions.

"Preliminary agreements have been reached on the development of two plants to produce a special grade of polyethylene, each with annual output capacity of 500,000 tons," Shahdaei said.

The two sides are also ironing out the details of an ethylene production project via cracking of ethane with 1.2 million tons in annual production capacity, she added.

"The prominent aspect of collaboration with Total in the petrochemical sector will be the transfer of knowhow for polyethylene production," the NPC chief noted. Polyethylene is primarily used in packaging, including plastic bags and containers such as bottles.

Total actively resumed business talks with Iran shortly after international economic sanctions were lifted against the country in January 2016.

The oil and gas supermajor signed a deal early last year to import 160,000 barrels per day of crude from Iran. Total and the National Petrochemical Company also signed a memorandum of understanding to jointly construct a petrochemical complex in the country.

Meeting With Rouhani
Rouhani-Total
Pouyanne on Monday met with President Hassan Rouhani in an unannounced meeting that signified how much the gas deal means for the centrist president who has made significant overtures to the West since taking office four years ago.

Rouhani asserted that the multibillion-dollar contract with Total is much more than a business agreement.

"The contract for developing Phase 11 of South Pars is not only an economic one, but also a scientific, technological and management cooperation,” President.ir quoted Rouhani as saying on Monday.

The government hopes the gas deal will pave the way for other international oil and gas companies to raise investment in Iran.

“It is our policy to cooperate with major companies such as Total. Currently, projects in gas and oil, worth roughly $ 200 billion, are ready for investment and major foreign companies can cooperate in these projects,” he said.

Pouyanne, who was appointed as CEO of Total in 2015, said he was happy that his company finalized the gas deal with Iran after 18 months of negotiations.

“The signing and execution of this contract will be a significant step in the development of economic and technological cooperation between the two countries," Pouyanne said.