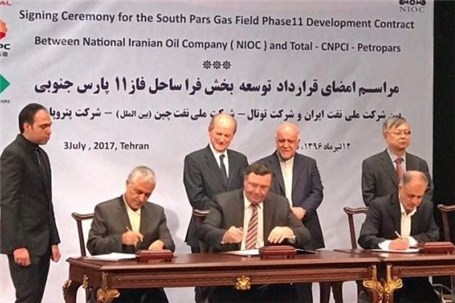 Reportimg Asre Bazar- French energy giant Total S.A. signed a groundbreaking deal on Monday to develop Phase 11 of the South Pars Gas Field in the Persian Gulf, becoming the first major oil and gas company to return to Iran's market after the conclusion of the nuclear deal with six world powers.

Reporting "Asre Bazar", it is the first contract concluded between Iran and a major western company within the framework of the Iranian Petroleum Contract, albeit outside of a tender process. Tehran says its first IPC tender for multinationals will be held in 3-4 months for a major oil deposit in the southern Khuzestan Province.

Total holds a 50.1% majority stake in the project and its partners, CNPC and Petropars–a subsidiary of the National Iranian Oil Company–have a 30% and 19.9% share respectively.

"This is a good day for Iran's petroleum industry. I hope the contract will open up a new chapter in the oil sector," Zanganeh was quoted as saying by Shana, the official news agency of the Oil Ministry.

Pouyanne hailed the "historic day" for Iran and Total and said, "We are happy to be the first company to return to Iran's oil industry after 18 months of arduous negotiations."

He added that Total is committed to financing the gas project and will abide by international laws.

"We are here in Tehran today because we have obtained necessary licenses," he said.

Hamid Akbari, managing director of Petropars, also said Total will transfer technology and know-how to his company "in a separate arrangement from the (South Pars) contract." He did not elaborate.

The deal comes on the back of a preliminary agreement that was signed in November. The new contract includes 14 new annexes from the November agreement, according to Shana.

$84 Billion Revenue
IRNA on Monday quoted Kardor as saying that with oil at $50 a barrel, Iran can make $84 billion from the gas deal with Total by the end of the term of the contract. Natural gas prices are closely associated with the price of crude oil.

The world's fourth-largest oil and gas company has pledged to make an initial $1 billion investment to develop Phase 11 as it aims to produce 50 million cubic meters of natural gas daily from the phase. Iranian officials have said that costs could top $5 billion.

The first stage of the project will cost around $2 billion and consists of 30 wells and two wellhead platforms connected to existing onshore treatment facilities. Total is expected to complete the Phase 11 project in three years and extract natural gas from the field for 20 years.

The French firm was initially due to sign the contract in early 2017, but Pouyanne said in February that it would wait to see the decision of US President Donald Trump's administration on sanctions against Iran.

Total was previously active in phases 2 and 3 of South Pars, but it ceased operations in Iran in 2010 following disagreements over contract terms as well as pressure from the French and US governments over oil and trade sanctions against Tehran.

Iran, the third largest producer in the Organization of Petroleum Exporting Countries, hopes its new IPC contracts will attract foreign companies and boost oil and gas production after years of underinvestment.

The vast offshore gas field is shared by Iran and Qatar, where Total is also a major player in gas production as well as in oil and refining. Tehran calls the giant field South Pars while Doha calls it the North Field.

Marquee Accomplishment
The administration of President Hassan Rouhani has come a long way in signing the first IPC contract and the gas deal with Total will add to the list of the president's marquee accomplishments.

Formerly a chief negotiator on Iran's nuclear issues, Rouhani and his aides reached a landmark agreement with the world powers in 2015 on lifting economic restrictions against Tehran in exchange for placing time-bound curbs on its nuclear program.

His government also devised the IPC framework that entails more attractive terms and conditions for investment in oil and gas projects over a previous buyback model to bring back foreign investment and technology in Iran's most important economic sector.

However, the IPC framework has faced scathing criticisms from domestic opponents of Rouhani and his administrations since its first public announcement about two years ago.

Top oil officials had promised to seal the Total gas deal before the end of Rouhani's first term as president in August.