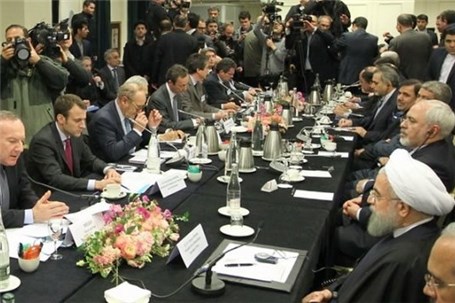 Reporting "Asre Bazar", “Given his presence in economic negotiations between the two countries after the implementation of the nuclear deal, officially known as the Joint Comprehensive Plan of Action, Macron can successfully pursue cooperation with Iran,” Hossein Salimi also noted in a write-up released on ICCIMA’s website at Otaghiranonline.ir.

Emmanuel Macron was elected French president on May 8 with a business-friendly vision of European integration, defeating Marine Le Pen, a far-right nationalist who threatened to take France out of the European Union.

“During last year’s France visit of President Hassan Rouhani, Macron drafted and signed contracts as the then French minister of the economy, finance, and industry. His presidency is a welcome sign of a new era in the history of France. He is not against Iran and has stressed the importance of having commercial ties with Iran during his speeches. In fact, he is the supporter of French companies’ investments in Iran,” he wrote.

Iran signed an array of deals worth €30 billion ($33 billion) during President Rouhani’s visit to France in January 2016, according to Bloomberg calculations.

Some media outlets like the British newspaper The Independent put the overall figure at a whopping €40 billion.

“Up until now, we have managed to strike different agreements, thanks to JCPOA. It is our hope to attract investment from European countries. French giants, including those in oil and gas, automotive and other industries, are powerful and eager to invest in Iran,” he said.

Salimi added that if political relations between the two countries improve, more companies will be encouraged to invest in Iran.

President Rouhani congratulated Macron on his election victory, in a letter published on his website last Monday. Rouhani expressed optimism over the expansion of relations between Iran and France under the Macron administration. He also said Iran is ready to discuss mutual, regional and international issues with the French government.

Salimi wrote that Macron’s victory in the presidential election will be beneficial to Iran, though it is not clear what policies he would employ in the face of US pressures.

“Now that anti-Iran sanctions are gone and the stage is set for cooperation, Europeans see no hurdle in the way of collaboration with Iran since we have witnessed international companies’ visits to Iran over the past year. European countries had a significant presence in the Oil and Gas Exhibition [held in Tehran] and this is a sign of their willingness to expand relations with Iran,” Salimi concluded.

Earlier this month, the House of Lords International Relations Committee in London issued a report, saying the UK can no longer rely on US leadership on Middle East policy and must work more closely with Europe to ensure the Iran nuclear deal stays in place.

“We can no longer assume America will set the tone for the West’s relationship with the Middle East,” said committee chairman, David Howell.

In its report, the committee cited, in particular, Trump’s approach to Iran and to the Arab-Israeli conflict. The report said the UK should work with its European partners on steps to ease restrictions on banks lending money for investment in Iran and to help develop new trade relationships, with Iran a priority for post-Brexit trade.

The British committee stressed that the UK should distance itself from the US government’s “destabilizing postures” on the Arab-Israeli conflict and give serious consideration to recognizing Palestine as a state to show it is committed to the two-state solution.